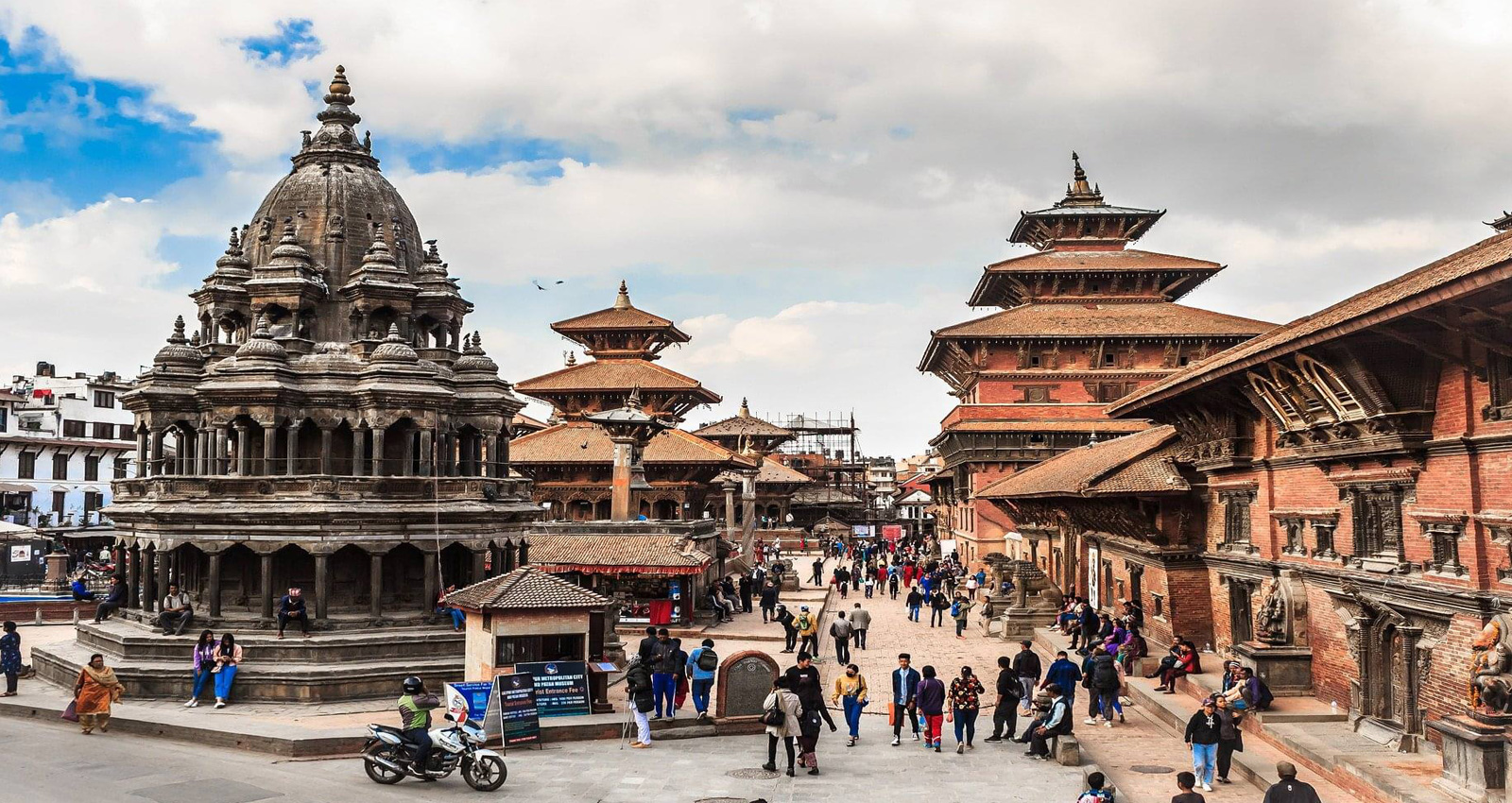 Patan, also known as ‘Lalitpur’, the city of artisans, lies 5 km southeast of Kathmandu, and is home to the valley’s finest craftsmen who have preserved such ancient techniques as the repoussé and lost wax process used to produce exquisite sculptures. The city retains much of the old charm with its narrow streets, brick houses and multitude of well-preserved Hindu temples, Buddhist monasteries (vihars) and monuments. The predominant sound in Patan is that of the tinkering of craftsmen bent over the statuettes they are shaping. As in Kathmandu, Hinduism and Buddhism have co-existed here for ages, influencing each other, and the religious harmony is exemplary.

Like its counterpart in Kathmandu, Patan Durbar Square is located in the heart of the city and was once the palace of the kings of Patan. The square is an enchanting mélange of palace buildings, artistic courtyards and graceful pagoda temples – a display of Newari architecture that had reached its pinnacle during the reign of the Malla kings. Among its numerous courtyards, the renovated Keshav Narayan Chowk has been converted into a bronze artifact museum. The Sundari Chowk with the sunken bath of Tusha Hiti is a showcase of exquisite woodcarvings, and stone and metal sculptures. The magnificent Krishna Temple with its 21 gilded spires, built in 1637, and the Manga Hiti, the sunken stone water spout, found in the palace complex are but a few examples of its opulence. The Krishna Temple, built entirely of stone, is said to be the first specimen of Shikhara-style architecture in Nepal.

To the east of Patan Durbar Square is Mahabouddha, an exceptional Buddhist monument of exquisite terra cotta art form. On this 14th-century architectural masterpiece are engraved thousands of images of Lord Buddha.

Also known as Uku Bahal, it is situated a few steps past Mahabouddha and contains an amazing collection of images and statues in metal, stone and wood. The stone-paved courtyard is enclosed by a two-story building with gilded roofs. The kings in ancient times were believed to have been crowned in this monastery. Many of the treasures offered by devotees can be seen here even today.

Dating from the 12th century, the three-storied shrine, also known as the Golden Temple, houses an image of the Buddha inside the courtyard or Kwa Bahal. The monastery is known for its exceptionally fine wood-carvings and repousse work. It is a five-minute walk west and north from the northern end of Durbar Square.

The temple dedicated to Lord Shiva is the only five-storied pagoda in Patan and one of the only three surviving five-storey temples in the country. A natural spring within the courtyard of this temple built in 1392 is said to have its source in the glacial lake of Gosainkunda in northern Kathmandu. A large gathering of devotees arrive here for a ritual bath on the day of Janai Poornima in August.

The Jagat Narayan Temple on the banks of the Bagmati River at Sankhamul is a tall shikhara-style temple consecrated to Lord Vishnu. Built of red bricks, the temple has many fine images. An attractive metal statue of Garuda mounted on a stone monolith is accompanied by several images of Ganesh and Hanuman.

There are four stupas, supposed to have been built by Emperor Ashoka of India in 250 BC, marking the four corners of Patan. They are situated at Pulchowk, Lagankhel, Ibahi and in Teta (way to Sano Gaon) respectively. At the time they were built, Buddhism was flourishing in the Kathmandu Valley.

Situated at Lagankhel near Sat Dobato, it is known for handicrafts such as wood carvings, metal craft, hand-woven woolen carpets and thanka paintings. There is a shopping arcade where handicrafts are on exhibition.