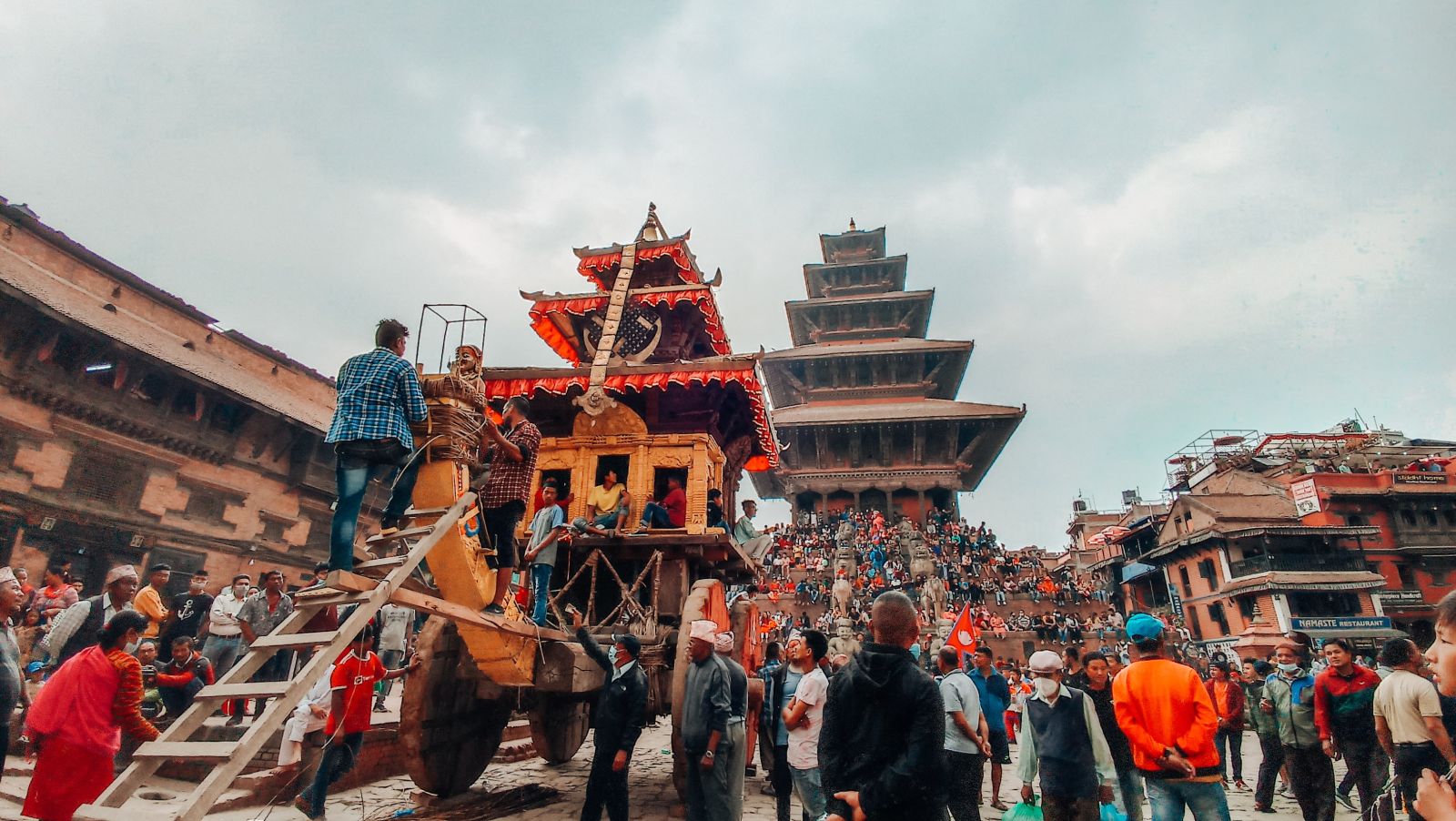 Perched on a hill at an altitude of 1,401 m, Bhaktapur or Bhadgaon, literally the City of Devotees, is a major tourist destination that takes visitors back in time. Bhaktapur lies 12 km to the east of Kathmandu on the Arniko Highway that leads to the Chinese border. Covering an area of 6.4 sq. km, Bhaktapur is still untouched by rapid urbanisation and has managed to retain its brickpaved roads, charming red brick houses and a way of life that goes back to medieval times. This ancient city is also famous for pottery and woodcarving amply displayed on the squares and windows respectively.

Among the three durbar squares, the Bhaktapur Durbar Square is by far the most elegant with its large open space facing south. The 15th century Palace of 55 Carved Windows and the palace entrance, the Golden Gate - a masterpiece in repousse art - have added splendor to this palace square which consists of buildings dating from the 13th century to the 18th century. The extraordinary Durbar Square with its extraordinary monuments reflects the glory days of the Malla dynasty when art and architecture thrived in the three cities of the valley. In front of the palace building are innumerable temples and architectural showpieces like the Lion Gate, the statue of King Bhupatindra Malla mounted on a giant stone pillar and the Batsala Temple. The stone temple of Batsala Devi is full of intricate carvings and is a beautiful example of Shikhara-style architecture. There is a bronze bell on the terrace of the temple, which is also known as the Bell of Barking Dogs. Erected by King Ranjit Malla in 1737, its sounding announced the beginning and end of a daily curfew.

The unique temple of Bhaktapur, the Nyatapola literally means ‘five storied’ and rises above the city’s landscape as a remarkable landmark. It also has the distinction of having withstood the devastating earthquake of 1933. Dedicated to a tantric goddess, the steps leading up to the temple are flanked by stone sculptures of deities and mythical beasts, each 10 times more powerful than the one immediately below.

Dedicated to Bhairav, the God of Terror, the three-storied temple of Bhairavnath has only the head of Bhairav in the inner sanctum. Legend has it that the Bhairav’s head was cut off by a tantric expert in order to keep him in Bhaktapur. Built in pagoda style, the temple is noted for its artistic grandeur and stands adjacent to the famous five-storied Nyatapola Temple.

It takes its name from the Dattatreya Temple dedicated to a three-headed combination of the Hindu deities Brahma, Vishnu and Shiva. This temple is said to have been built from the trunk of a single tree. Near this temple is a monastery with exquisitely carved peacock windows.

For a small city, Bhaktapur has the largest number of public water tanks built within the city limits. Siddha Pokhari, which dates back to the Lichhavi period, is situated at the bus stop. This large rectangular pond teems with fish and has stone images of different Hindu and Buddhist gods on the walls surrounding it.

It is a Newar town situated about 8 km east of Kathmandu on the way to Bhaktapur. Besides farming, most of the households here are engaged in pottery. This laid-back town not only supplies Kathmandu its pottery but also its vegetables. The two important deities here are those of Balkumari Temple, dedicated to the Mother Goddess, and Karunamaya, the Buddha of Compassion.

The temple dedicated to the Hindu deity Ganesh. Situated in a thick forest to the south of Bhaktapur, it is a 20-minute walk from the bus stop. The temple is crowded with devotees especially on Tuesdays and Saturdays.

It is situated on a ridge overlooking Bhaktapur, about 12 km to the east of Kathmandu. Dedicated to the Hindu god Vishnu, it is one of the oldest specimens of pagoda architecture in the valley. The temple dating from the Licchavi period is embellished with exquisite wood and stone carvings.